You are here: Home / Uncategorized / If you work it, it works! 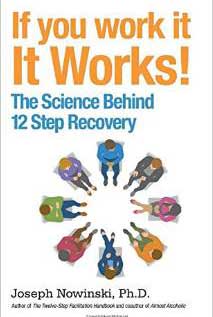 I don’t typically make book recommendations here. Today is an exception. If you are interested in the scientific research about the effectiveness of 12 step recovery, I highly recommend If you work it. It Works!: The Science Behind 12 Step Recovery by Joseph Nowinski [Hazelden, 2015]. Nowinski was one of the primary designers of the TSF (Twelve Step Facilitation) track in Project Match — a very large study of the effectiveness of different interventions with alcoholics. The book is intended for readers who are unfamiliar with research methods or statistics so it is quite readable. It provides an overview of the current state of scientific research about program effectiveness.

Just a couple of comments.

I found it quite noteworthy that the scientific community no longer seems particularly focused on studying whether or not 12 step fellowships are effective. The evidence for this is overwhelming. Attention has turned instead to trying to figure out why twelve step fellowships are so effective. For example, the research has been clear for a long time that frequent attendance at meetings early in recovery has a dramatic positive impact on long-term sobriety. There is a sound scientific basis for recommending 90 meetings in 90 days! [Note: This has pretty obvious implications for recovery ministries in the local church–which typically involve only weekly meetings. Bottom line: it is really important to make a major effort to encourage people to participate in A.A. or other appropriate fellowships in addition to attending your church-based recovery program.] The demonstration of a correlation between frequent meeting attendance and long-term sobriety does not, however, tell you what precisely about meeting attendance is making sobriety possible. Is it just showing up? Is it that frequent meeting attenders are more likely to get a sponsor? Is it that frequent meeting attenders are more likely to become fully assimilated into recovery culture? Is it that regular attenders are more likely to be practicing the spiritual disciplines in the 12 steps?

These questions are not fully answered by current research but there are some fascinating hints. Some studies suggest that getting a sponsor is a critical step–and that the earlier you get a sponsor the better. There are also some interesting studies, I’d call them quite preliminary, on the connection between the spiritual practices of the 12 steps and long-term sobriety. There was a fascinating study done at Duke University that compared the spiritual beliefs of people in recovery and a group of Christian pastors. Here’s Novinski’s summary: “These results strongly suggest that people who identify themselves with A.A. and report having been in recovery for some time espouse spiritual beliefs comparable to those of clergy. This in itself is evidence that spirituality is a dynamic force in recovery and that A.A. is correct in its belief that spirituality is central to recovery.”

It is also notable that the way in which people are referred to A.A. can make a difference in long term outcomes. A minimalist referral–suggesting that A.A. might be helpful and providing a list of local A.A. groups–is substantially less effective than a more robust referral. A more robust referral might include connecting a person with a current member of A.A. who could accompany someone to their first meeting. It might also involve providing education about 12 step culture and advice about being a newcomer in the program. It might involve a series of follow-up meetings to provide encouragement for continued participation. It might involve encouraging people to go beyond meeting attendance as quickly as possible to other actions like getting a sponsor and working the steps. Any of these ideas could enrich pastoral interactions with people in the earliest stages of recovery.

Most of this information has been available in peer reviewed journals for some time. It is really helpful, however, to have this kind of overview available in non-technical language. Enjoy.

We use cookies to ensure that you have the best experience on our website. If you continue to view the site, we will assume that this is OK. For details see our privacy policy.OkPrivacy policy